Cape Byron is the most eastern part of the Australian mainland. Byron Bay is reachable from the Pacific Highway which runs along most of the eastern seaboard. Coaches and Tours are available from many departure points though Brisbane and The Gold Coast are the most common. Ballina Airport is closest, though the Gold Coast and Lismore also service domestic flights. Brisbane is the closest international airport but travel arrangements can be made from anywhere in Australia.

There are Cottages at the lighthouse itself though Byron Bay caters to everyone in terms of accommodation. Whether your style is Hotels, Motels, Resorts, Apartments, Holiday Houses, Bed and Breakfasts, Caravan and Camping Sites or Backpackers and Hostels, it’s all available for your enjoyment. One of the strongest lights in Australia, Cape Byron Lighthouse stands on a rocky headland that juts into the Pacific Ocean. The cape was named by Captain James Cook in 1770 to honour another British explorer, John Byron, grandfather to the well-known poet. Construction of the lighthouse was completed in 1901 and is the last of the Victorian era lighthouses maintained by the National Parks and Wildlife Service.

Cape Byron and the lighthouse are part of the 22000 hectare Cape Byron Marine Park. Created in 2002, the park is designed to manage commercial and recreational fishing. There are several accessible walking tracks around the cape that offer spectacular views and the chance to spot migrating Humpback Whales.

The town of Byron Bay is one of the most popular touring destinations in Australia and sums up what the imagined Australian Lifestyle is all about. Renowned for its awesome beaches and surfing, a vibrant cultural and artistic scene and holding some amazing festivals and events, there is something for everybody in Byron Bay. 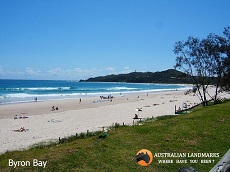 5 Things To Do at Byron Lighthouse