On top of the summit of Black Mountain in Canberra, the Capital City of Australia is Black Mountain Tower. Canberra Airport services both international and domestic flights. The Australian Capital Territory is relatively close to Sydney with trains and coaches running regular services. Black Mountain Tower itself is accessible by car, from the Black Mountain Drive turn-off, on Clunies Ross Street. If self driving isn't your thing, many local tour companies include the tower in their day-trip itineraries.

Any type of accommodation you could want is available in the city of Canberra. With Hotels, Motels, Bed and Breakfasts, Hostels, Resorts, Holiday Parks and more, we're sure you will find something to suit. Opened on 15 May 1980 by the then Prime Minister Malcolm Fraser as the Telecom Tower, this famous landmark serves not only as a functional communications centre but also as one of the most popular tourist attractions in Canberra.

Black Mountain Tower has a stunning 360 degree view of the Nation's Capital from both indoor and outdoor viewing platforms. The tower is also home to Canberra's only revolving restaurant, Alto. Taking 85 minutes to complete a revolution, the restaurant is unique and innovative, serving modern Australian cuisine, with progressive European influences, as you enjoy the spectacular ever changing views.

Black Mountain, close to Canberra's CBD, is one of the 30 separate areas included in The Canberra Nature Park. The mountain is covered in native eucalyptus forest and is a haven for native wildlife. This and the tower's visibility from most of the Capital led to some controversy during planning but the High Court of Australia eventually gave the go ahead.

The mountain rises 256 metres above Lake Burleigh Griffin and Black Mountain Tower rises another 195.2 metres above that. The world class spectacular views of Canberra and it's rural surrounds are definitely worth checking out when your visiting the ACT and Canberra. 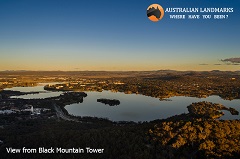 5 Things To Do at Black Mountain Tower