From Darwin, the state capitol of the Northern Territory, head south by either joining a tour, catching a light plane or self driving. Darwin Airport is serviced by international and domestic flights.

View Uluru in a larger map Formerly known as Ayer's Rock, Uluru, its traditional name, is the world's largest monolith (a stone separated from it's strata). Much of its mass is hidden below ground yet the exposed portion stands above ground some 348 metres high (1141 feet).

The surrounding Uluru-Kata Tjuta National Park is World Heritage Listed and notable in being one of the few properties listed for both its natural and cultural values. Care of the area was returned to the Anangu people in 1985 as the site carries great significance and spiritual importance for them.

Located in the heart of the Northern Territory, Uluru is certainly one of the most well known Aussie landmarks and the greatest of all natural Australian landforms to visit if you are touring and sight seeing Down Under. 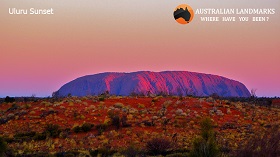 5 Things to Do at Uluru