Fraser Island is located along the south Queensland coast about 200 kilometres north of Brisbane, the State Capitol of Queensland. The two main departure points for vehicular and passenger ferries to the island are Hervey Bay and Rainbow Beach. Rainbow Beach is a great option of your self-driving from Brisbane though be aware the island itself is entirely 4WD access only. Hervey Bay is serviced by regular Bus, Coach and Rail Services as well as by domestic Flights from major east coast centres like Brisbane, Sydney and Melbourne.

There are three main types of accommodation on the island, Luxury Resorts and Wilderness Retreats, Holiday Home rentals and Camping. There is only one private campground though camping is permitted in some areas of the National Park. Bear in mind that the entire island is 4WD access only so caravans are generally not feasible. Dogs are strictly prohibited as well as swimming in the ocean due to riptides and sharks. The largest sand island in the world, Fraser Island is made of up to 240 metre tall sparkling white dunes that are still changing and evolving after 700,000 years. The sand dunes are home to diverse habitats including over 100 fresh water lakes, 40 of which are perched dune lakes, 50% of the world’s total. The island contains the largest extent of coastal heaths in Queensland and is the only place on the planet where tall rainforests grow in sand. There are also some of the only fens in Australia as well as eucalyptus woodlands, wallum and peat swamps and mangrove forests to enjoy.

Fraser Island is well known to nature enthusiasts. The Dingoes here are the last pure examples of their species on the planet (dogs are strictly forbidden on the island). There are around 35 species of other mammals, 350 or so species of birds, more than 70 species of reptiles and amphibians including acid frogs, various snakes, goannas, geckos and turtles and much more. Even the surrounding waters are full of life like Humpback Whales, Dolphins, Dugongs and Tiger Sharks.

It’s easy to see why most of the island is included in the Great Sandy National Park and was inscribed most deservedly as a World Heritage site in 1992.

Named after Eliza Fraser, who survived being shipwrecked here in 1836 with the help of the indigenous Butchulla people, Fraser Island is now a popular tourist destination with over 350,000 visitors each year. The dingoes are a crowd favourite though many come to see the natural beauty of the island’s attractions like the coloured sands of Rainbow Gorge, the crystal waters of Eli Creek or the rainforest ferns that have the largest fronds in the world. Of course some just come for the spectacular beach fishing.

We can’t do this remarkable place justice on our site, let alone cover all the reasons to visit here, so you’ll just have to take our word that Fraser Island is one Australian landmark you do not want to miss when you traveling Down Under. 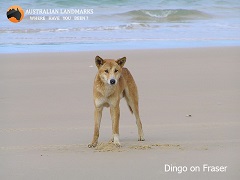 5 Things To Do at Fraser Island