There is a multitude of ways to reach Flemington Racecourse. Located just 6kms Northwest of Melbourne’s CBD, take your choice of self-driving, buses, trams, trains or if you wish to make an entrance, limousine, chartered ferry or helicopter. Melbourne Airport is serviced by international and domestic flights.

There are plenty of accommodation options near Flemington but these are quickly booked out around Melbourne Cup time. Due to the ease of transport, there are many places to stay, in all kinds of styles, in the broader Melbourne Area. Australia’s most famous horse racing venue, Flemington is home to the Melbourne Cup, the richest horse race in the country.

Added to the Australian National Heritage List in 2006, this historic place saw its first horse race in 1840. Named after the hometown of the wife of local property owner and hotelier, James Watson; use of the name Flemington for the course was common by the late 1850’s.

Australia’s premier horse race, The Melbourne Cup, was first held on the 7th of November 1861. In a calculated marketing strategy, members of the Victorian Racing Club were issued with two ladies tickets expecting, “where ladies went, men would follow”, and they did, a crowd of 4000 attended the first Cup.

Flemington has come a long way since that 1840 race held on the Maribyrnong river flats. Within its first few decades, attendance for The Melbourne Cup reached an estimated 100,000. Attendance to “the race that stops a nation” is now capped at 120,000 to avoid overcrowding, though Victorians get a public holiday to enjoy “the sporting, social and cultural event which plays a significant role in defining our national identity”. 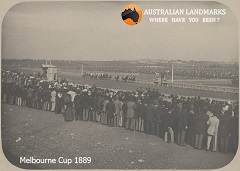 5 Things To Do at Flemington Racecourse