Coober Pedy is on the Stuart Highway, 846 km from Adelaide in northern South Australia. The town can be accessed by car, coach and regional air from Adelaide. You could also travel by train from Adelaide, on the Ghan line, though the station is 47km from town and transportation into Coober Pedy would have to be arranged. Adelaide Airport services international and domestic flights.

There is plenty of accomodation in town, underground or above, Inns, Motels, Hotels, Units, Backpackers, Caravan Parks, the choice is yours. Known as 'The Opal Capital of the World', it is estimated that around 80% of the world's opals are mined here in Coober Pedy. The first opal was discovered in 1915 and due to a law that does not allow large scale mining there are now more than 250,000 mine shaft entrances in the vicinity. The name of the town itself is an Anglicization of the Aboriginal phrase, 'kupa-piti' which apparently means 'white man's hole'. Primarily due to the influx of prospectors from around the world during the last 100 years, Coober Pedy has become a cosmopolitan multicultural town with over 45 different nationalities represented.

Being in the desert, Coober Pedy gets hot in the summer, often exceeding 40 degrees Celsius (104degreesF). This has led to people building their dwellings, and much more, underground. This practice has made the town unique in Australia and the World. Not surprisingly, the world's only truly underground bar and gaming room is carved out of the bedrock here. That's not all though, during pioneering times a non - denominational church was dug underground, possibly being the world's first as well. There are now many attractions to visit in this world beneath the surface including people's homes, an Aboriginal Interpretive Centre and a Museum housing one of the world's finest opal collections.

Featured in movies like "Priscilla, Queen of the Desert" and "Mad Max, Beyond Thunderdome" the town and it's surrounding landscape are well known internationally and should be on anyone's to do list if they want to experience the true Australian Outback. 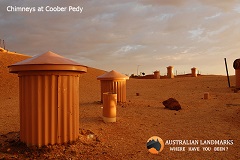 5 Things To Do at Coober Pedy